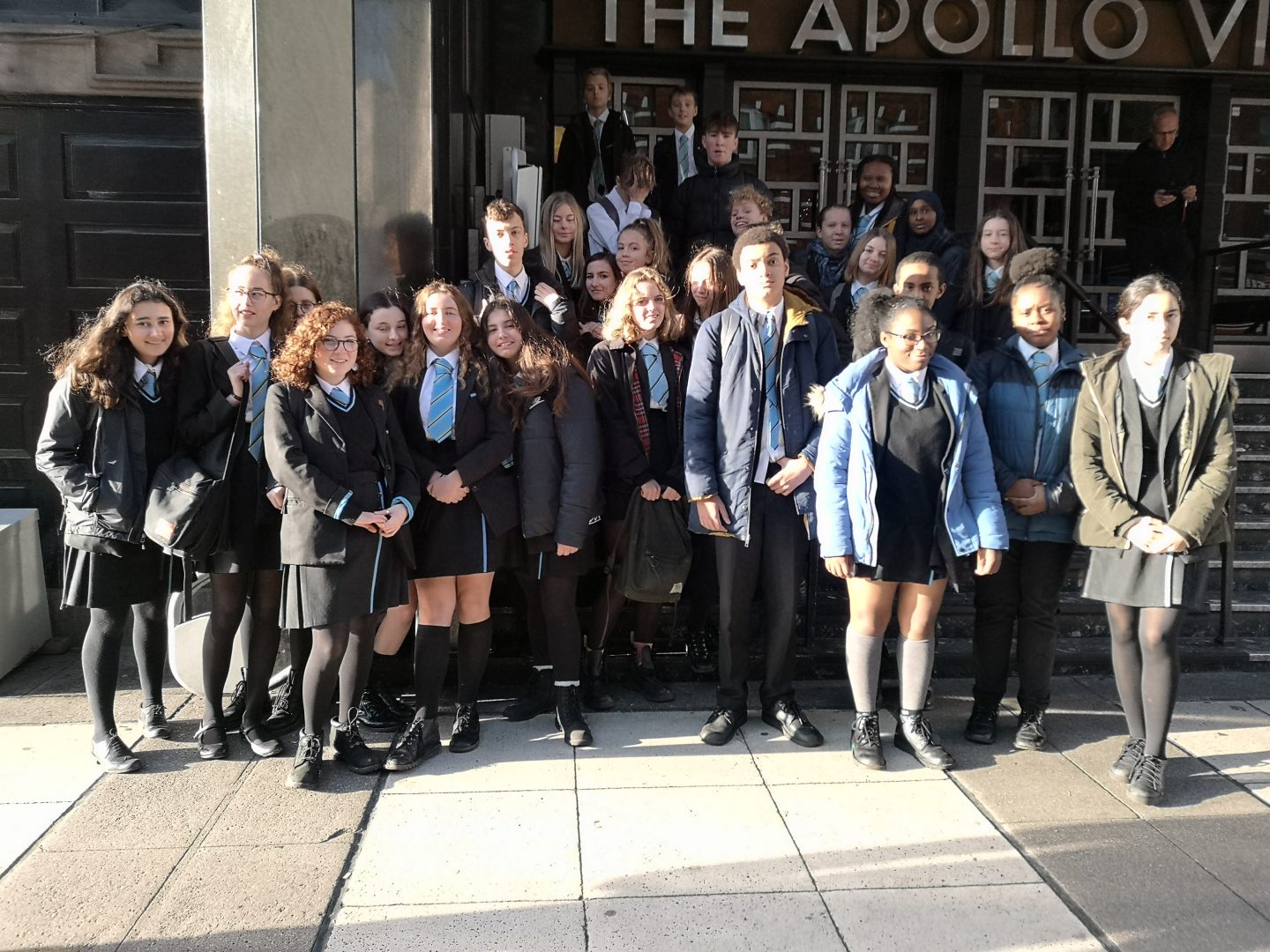 Today our Year 10 students attended GCSE Poetry Live. What a fun and exciting learning experience it was for all! They were given the opportunity to hear valuable advice from chief examiner Tony Childs, experience poetry being read aloud and explained by poets of the poems found in the current syllabus. Some poems were even expressed through different forms such as rap, which gave students a chance to study and understand GCSE poetry through various methods whilst being thoroughly entertained.

The students were very engaged. It was a privilege to see Simon Armitage the Poet Laureate.

Some of the poetry readers and sessions that took places was:

The day kicked off with the examiners’ session hosted by Tony Childs. He gave advice to students on methodologies to tackle unseen poems and presented techniques on how to analyse and explain poems in the exam. Here are some approaches he shared: 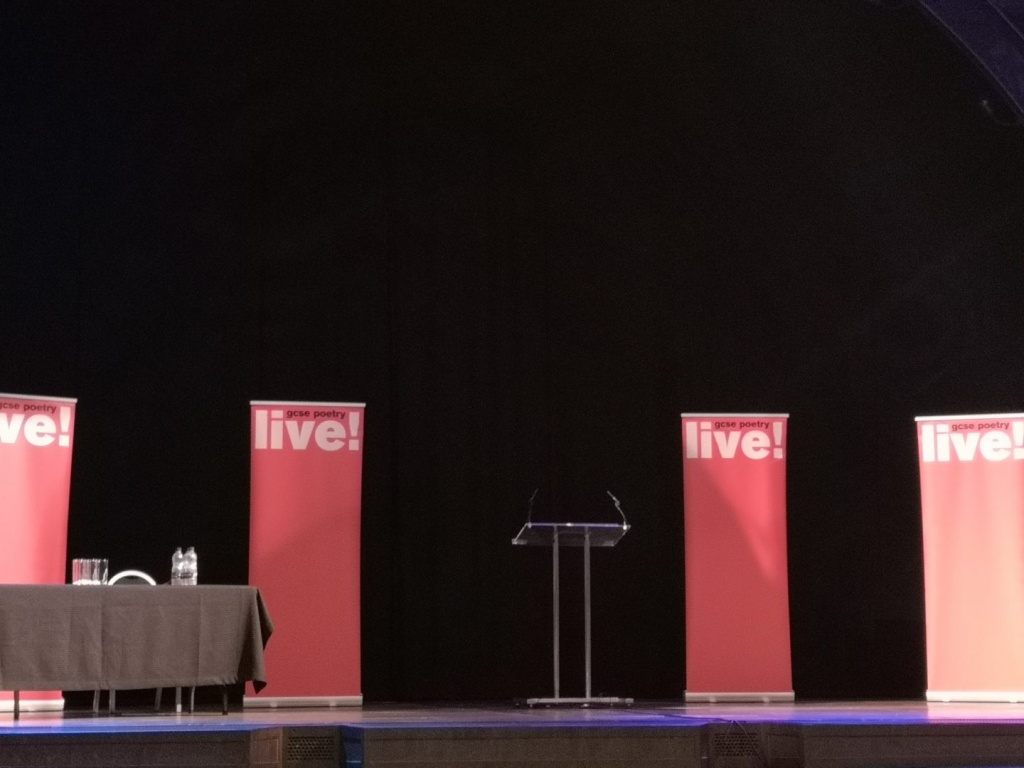 Carol Ann Duffy and Gillian Clarke shared the stage explaining and reading out some of their poems.

Duffy developed a real love for poetry in her teenage years. Her English teachers encouraged her to write and follow her passion for language. A decade after obtaining a degree at the University of Liverpool, she moved to London and became a full-time poet. She published poems which became quickly popular to a wide audience and were critically acclaimed. Carol Ann Duffy won multiple awards of major poetry prizes. Between 2009 and 2019, she was the Poet Laureate of the United kingdom. The only openly gay women to have done so. During the session she read poems such as Before You Were Mine, War Photographer, Valentine and Warming Her Peals.

Gillian Clarke has been writing poetry since she was in school. Despite being discouraged at university she continued with her passion. Her first poem to be published, The Sundial was rescued from the bin by her first husband. Which was sent to a poetry magazine. Gillian Clarke has a number of much acclaimed collections, she translates poetry from Welsh, she has been a distinguished library editor, a playwright and the president of the north Wales creative writing centre. In 2008 she became the National Poet for Wales, in 2010 she was awarded the Queen’s Gold Medal for Poetry and in 2011 she was made a member of the Gorsedd of Bards. Gillian Clarke and Carol Ann Duffy edited the anthology, The Map and Clock (Faber Faber) in 2016. Some of the poems Gillian explained and read out was Catrin and Cold Knap Lake.

At the event Gillian revealed that Cold Knap Lake has an interesting story to it. The child she wrote in the poem later got in touch with Gillian and proved that it was her. The girl that was saved by her mother after she was pulled out of the lake when drowning.

Daljit Nagra has won many prizes for his poetry. In 2004 he won the Forward Prize for Best Individual Poem for the title poem from his collection of Look We have Coming to Dover! This poem also gained him a Decibel Award at The South Bank Show. Daljit Nagra is on the Board of the Poetry Book society. He has judged the Samuel Johnson Award, The Guardian First Book Prize, The Foyles Young Poets Competition, The National Poetry Competition and has hosted the TS Eliot Poetry Readings and regularly participates in programmes on the radio. Daljit Nagra comes from a Punjabi background and uses his experience to write poetry, and during the show spoke in the accent when reading his poems, one which was Singh Song!

A valuable guest to our Highgate Wood School audience was Simon Armitage. He has received a great number of awards for his poetry such as the Sunday Times Young Author of the Year, one of the first Forward Prizes and a Lannan Award. Simon Armitage is the author of four stage plays, his recent theatrical work was The Odyssey – he was commissioned by the BBC and received a Gold Award at the Spoken Word Awards in 2005. Simon Armitage has also written for radio and over a dozen television films. Some of the poems he read at the event was The Manhunt, Remains and From Book of Matches.

John Agard was most popular amongst the students at Poetry Live, as soon as his name was mentioned all you could hear was the loud cheers from the crowd. His love for language started in school, his favourite subjects were English, French and Latin. Agard has worked at the Georgetown Library, Guyana Sunday Chronicle as sub-editor feature writer. He became a touring speaker for the Commonwealth Institute in 1977 and visited hundreds of schools in the UK. He has been writer-in-residence at the South Bank Centre, London, the BBC and the National Maritime Museum. John Agard has won awards such as the Casa de las Americas Poetry Prize and the Paul Hamlym Award. Some of the poems he read at the event was Checking Out Me History, Half-Caste and Flag.

And, we can’t forget about the lovely students who helped distribute leaflets and booklets at the event! 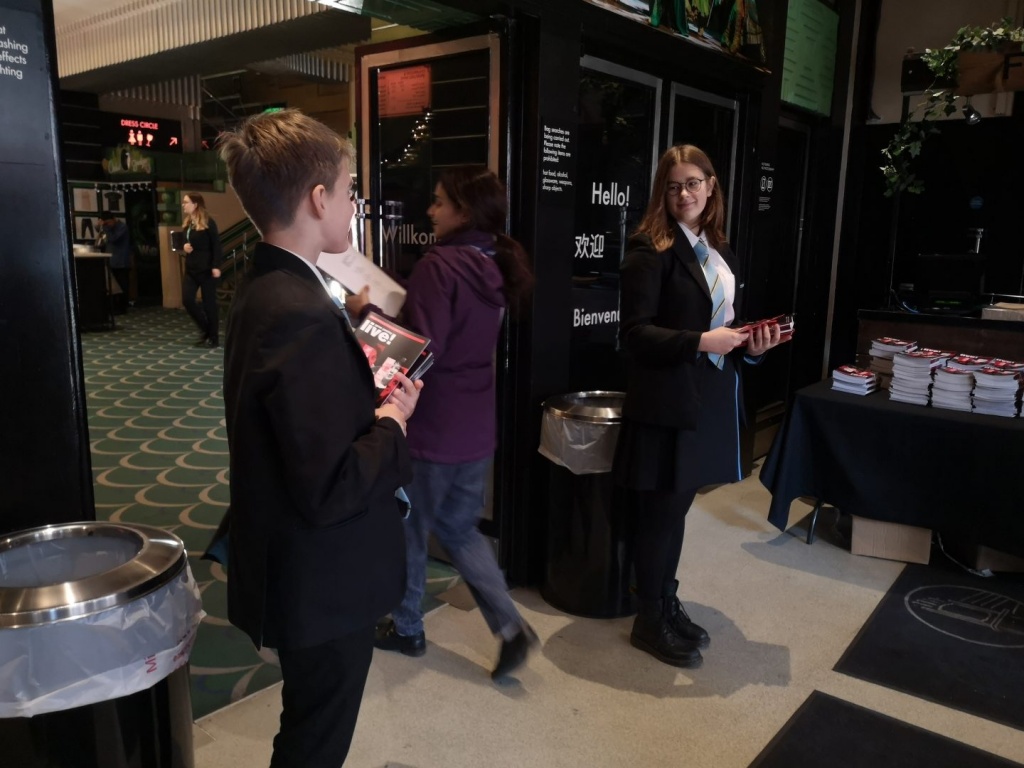 I was very impressed by the excellent behaviour from the students, in fact, we all got there ten minutes early due to their sensible conduct. Going to Poetry Live was a very enjoyable experience, the children were very engaged and I am looking forward to seeing their wonderful results they’ll be achieving in their poetry exam.

Overall, our Year 10 students had an amazing time! The feedback from students was very positive. They thought it was a fantastic event that has helped with their understanding on how to write about different poems and what the examiners will be expecting. Many said they enjoyed the poets talking about their background stories behind the poems and what inspired them to write about them.